A constant current i is passed through a resistor. Taking the temperature coefficient of resistance into account, indicate which of the plots shown in figure base represents the rate of production of thermal energy in the resistor.

When current passes through a resistor, the heat produced by Joule’s heating effect is given by-

R = resistance of the resistor

t = time for which current is flowing

Since with increase in the temperature of the resistor, its

The rate of production of thermal energy

in the resistor will be-

i = current flowing through the resistor and

R = resistance of the resistor

From above equation, the rate of production of thermal energy in

the resistor is directly proportional to the resistance.

Ro is the initial resistance of the resistor

α is the coefficient of thermal conductivity

T is the temperature

Thus, the resistance of the resistor start increasing with the increase in temperature.

also increases linearly with time starting from a point

, which is best shown by plot d.

An electric bulb marked 220 V, 100 W will get fused if it is made to consume 150 W or more. What voltage fluctuation will the bulb withstand?

A servo voltage stabilizer restricts the voltage output to 220 V ± 1%. If an electric bulb rated at 220 V, 100 W is connected to it, what will be the minimum and maximum power consumed by it?

Figure shows an electrolyte of AgCl through which a current is passed. It is observed that 2.68 g of silver is deposited in 10 minutes on the cathode. Find the heat developed in the 20Ω resistor during this period. Atomic weight of silver is 107.9 g mol–1.

Find the charge required to flow through an electrolyte to liberate one atom of (a) a monovalent material and (b) a divalent material.

Find the thermo-emf developed in a copper-silver thermocouple when the junctions are kept at 0°C and 40°C. Use the data in table (33.1).

The 2.0 Ω resistor shown in figure is dipped into a calorimeter containing water. The heat capacity of the calorimeter together with water is 2000 J K–1.

(a) If the circuit is active for 15 minutes, what would be the rise in the temperature of the water?

(b) Suppose the 6.0 Ω resistor gets burnt. What would be the rise in the temperature of the water in the next 15 minutes? 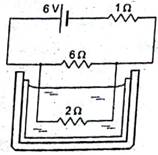 A coil of resistance 100 Ω is connected across a battery of emf 6.0V. Assume that the heat developed in the coil is used to raise its temperature. If the heat capacity of the coil is 4.0 J K–1, how long will it take to raise the temperature of the coil by 15°C.

When a current passes through a resistor, its temperature

increases. Is it an adiabatic process?

What were the factors which led to the popularity of Indira Gandhi’s Government in the early 1970s?

is a unit vector, if the angle between

Is the converse true? Justify your answer with an example.

Area of a rectangle having vertices A, B, C and D with position vectors