(b) Verify this result for the simple configuration of two charges of the same magnitude and sign placed a certain distance apart.

NOTE: A test charge is a positive charge of unit magnitude. A null point or neutral point is a point where magnitude of electric field is zero. A pair of charges of equal magnitude and opposite sign is known as a dipole.

How useful is this solution?We strive to provide quality solutions. Please rate us to serve you better.
PREVIOUSIt is now believed that protons and neutrons (which constitute nuclei of ordinary matter) are themselves built out of more elementary units called quarks. A proton and a neutron consist of three quarks each. Two types of quarks, the so called ‘up’ quark (denoted by u) of charge + (2/3) e, and the ‘down’ quark (denoted by d) of charge (–1/3) e, together with electrons build up ordinary matter. (Quarks of other types have also been found which give rise to different unusual varieties of matter.) Suggest a possible quark composition of a proton and neutron.NEXTA particle of mass m and charge (–q) enters the region between the two charged plates initially moving along x-axis with speed vx(like particle 1 in Fig. 1.33). The length of plate is L and an uniform electric field E is maintained between the plates. Show that the vertical deflection of the particle at the far edge of the plate is Compare this motion with motion of a projectile in gravitational field discussed in Section 4.10 of Class XI Textbook of Physics.
Related Videos

A particle having a charge of 2.0 × 10–4 C is placed directly below and at a separation of 10 cm from the bob of a simple pendulum at rest. The mass of the bob is 100g. What charge should the bob be given so that the string becomes loose?

(a) Describe briefly the process of transferring the charge between the two plates of a parallel plate capacitor when connected to a battery. Derive an expression for the energy stored in a capacitor.

(b) A parallel plate capacitor is charged by a battery to a potential difference V. It is disconnected from battery and then connected to another uncharged capacitor of the same capacitance. Calculate the ratio of the energy stored in the combination to the initial energy on the single capacitor.

(a) Derive an expression for the electric field at any point on the equatorial line of an electric dipole.

(b) Two identical point charges, q each, are kept 2m apart in air. A third point charge Q of unknown magnitude and sign is placed on the line joining the charges such that the system remains in equilibrium. Find the position and nature of Q.

Consider a coin of Example 1.20. It is electrically neutral and contains equal amounts of positive and negative charge of magnitude 34.8 kC. Suppose that these equal charges were concentrated in two point charges separated by (i) 1 cm , (ii) 100 m ( ∼length of a long building), and (iii) 106 m (radius of the earth). Find the force on each such point charge in each of the three cases. What do you conclude from these results?

Four-point charges Q, q, Q and q are placed at the corners of a square of side ‘a’ as shown in the figure.


(a) resultant electric force on a charge Q, and


(b) potential energy of this system.


(a) Three-point charges q, – 4q and 2q are placed at the vertices of an equilateral triangle ABC of side ‘l’ as shown in the figure. Obtain the expression for the magnitude of the resultant electric force acting on the charge q. 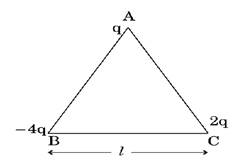 (b) Find out the amount of the work done to separate the charges at infinite distance.