A comet orbits the sun in a highly elliptical orbit. Does the comet have a constant (a)linear speed, (b) angular speed, (c) angular momentum, (d) kinetic energy, (e) potential energy, (f) total energy throughout its orbit? Neglect any mass loss of the comet when it comes very close to the Sun.

Suppose a comet orbits around sun in elliptical orbit , so its motion will be in accordance with Kepler's laws , now suppose at any instant planet was at a point A at a distance of r from sun and after a while it moved to a point B at a distance R’ from sun in this motion it subtended an angle 𝜽 with the sun and two position and its speed changed from v to v’ direction of motion is always tangential to orbit

(a) Linear speed of the comet is not constant, and its speed increases when its closer to sun and decreases when its farther from sun and since, according to Kepler's second law comet must sweep equal areas in equal interval of time, i.e. area made between sun and line joining two positions of comet must be same in the same interval of time, but sun is not equidistant from planet so speed of planet changes so that area swept remains same.

(b) Now angular speed is also not constant as it is the rate of change of angle which is subtended between the two positions of comet and sun, since planet, speed changes so it covers unequal angles in equal interval of time so its angular speed varies.

Where U is the potential Energy of a body of mass m1 at a point at a distance R from a center of mass of Body of mass m2, G is universal Gravitational constant

Since distance R of the comet of mass m1 changes from the sun of mass m2 changes continuously potential energy also changes.

How useful is this solution?We strive to provide quality solutions. Please rate us to serve you better.
PREVIOUSDoes the escape speed of a body from the earth depend on (a) the mass of the body, (b) the location from where it is projected, (c) the direction of projection, (d) the height of the location from where the body is launched?NEXTWhich of the following symptoms is likely to afflict an astronaut in space (a) swollen feet, (b) swollen face, (c) a headache, (d) orientational problem.
Related Videos

Earth’s orbit is an ellipse with eccentricity 0.0167. Thus, earth’s distance from the sun and speed as it moves around the sun varies from day to day. This means that the length of the solar day is not constant through the year. Assume that earth’s spin axis is normal to its orbital plane and find out the length of the shortest and the longest day. A day should be taken from noon to noon. Does this explain variation of length of the day during the year?

(Hint: you may assume circular orbit for the earth).

Out of aphelion and perihelion, where is the speed of the earth more and why?

A Mars satellite moving in an orbit of radius 9.4 × 103 Km takes 27540 s to complete one revolution. Calculate the mass of Mars.

The moon takes about 27.3 days to revolve round the earth in a nearly circular orbit of radius 3.84 × 105 Km. Calculate the mass of the earth from these data.

The time taken by the Mars to revolve round the sun is 1.88 years. Find the ratio of average distance between Mars and the sun to that between the earth and the sun.

Shown are several curves (Fig. 8.2). Explain with reason, which ones amongst them can be possible trajectories traced by a projectile (neglect air friction). 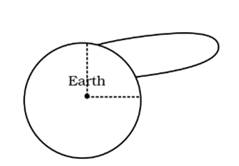 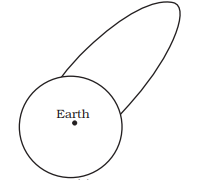 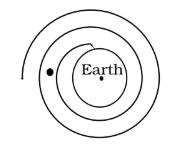 If the sun and the planets carried huge amounts of opposite charges,

A satellite of mass 1000 kg is supposed to orbit the earth at a height of 2000 Km above the earth’s surface. Find

(a) Its speed in the orbit.

(b) Its kinetic energy.

(c) The potential energy of the earth-satellite system and

In our solar system, the inter - planetary region has chunks of matter (much smaller in size compared to planets) called asteroids. They

What is the difference between the system of reservation of constituencies and the system of separate electorate? Why did the Constitution makers reject the latter?

Discuss the following in groups of two pairs, each pair in a group taking opposite points of view.

Advanced technology gives us conclusive evidence of past events.

In Exercises, find the equation of the line which satisfy the given conditions:

Perpendicular distance from the origin is 5 units and the angle made by the perpendicular with the positive x-axis is 30o.

and x lies in IInd quadrant, find the values of