35. Magnetic Field due to a Current

A circular loop of radius r carrying a current i is held at the center of another circular loop of radius R (>>r) carrying a current I. The plane of the smaller loop makes and angle of 30° with that of the larger loop. If the smaller loop is held fixed in this position by applying a single force at a point on its periphery, what would be the minimum magnitude of the force?


Class 12thHC Verma - Concepts of Physics Part 235. Magnetic Field due to a Current

Current carried by circular loop of radius r = i

Current carried by circular loop of radius R(>>r) = I

Angle between the planes of the two loops = 300 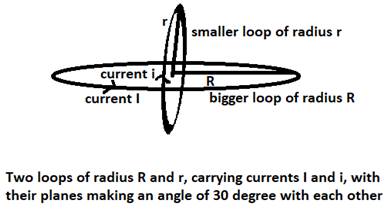 I = current through the loop,

r = radius of the circle,

Magnetic torque acting on a loop of radius r

I = current carried by the loop,

Therefore, magnetic field at the center of the loops due to the bigger loop(B) =

A = area of smaller loop, B = magnetic field due to bigger loop.

θ is the angle between the area vector of the smaller loop and the magnetic field of the larger loop.

|A| = magnitude of area of smaller loop,

|B| = magnitude of magnetic field due to larger loop.

The angle between the area vector of the smaller loop and the magnetic field of the larger loop is θ = 300.

Torque on smaller loop due to magnetic field,

Torque due to external force on its periphery,

r = perpendicular distance between the line of action of force and the point at which the torque is acting.

Here, F and r are perpendicular to each other, since the force is being applied to the periphery.

How useful is this solution?We strive to provide quality solutions. Please rate us to serve you better.
PREVIOUSAcircular loop of radius R carries a current I. Another circular loop of radius r (<<R) carries a current i and is placed at the center of the larger loop. The planes of the two circles are at right angle to each other. Find the torque acting on the smaller loop.NEXTFind the magnetic field B due to a semicircular wire of radius 10.0 cm carrying a current of 5.0 A at its center of curvature.
Related Videos

Two ions have equal masses but one is singly ionized and the other is doubly ionized. They are projected from the same place in a uniform magnetic field with the same velocity perpendicular to the field.

Two wires carrying equal currents i each, are placed perpendicular to each other, just avoiding a contact. If one wire is held fixed and the other is free to move under magnetic forces, what kind of motion will result?

If a charged particle projected in a gravity-free room deflects,

You are facing a circular wire carrying an electric current. The current is clockwise a seen by you. Is the field at the centre coming towards you or going away from you?

The torque on a current loop is zero if the angel between the positive normal and the magnetic field is either θ = 0 or θ = 180°. In which of the two orientations, the equilibrium is stable?

The net charge in a current-carrying wire is zero. Then, why does a magnetic field exert a force on it?

People tend to amass possessions, sometimes without being aware of doing so. They can have a delightful surprise when they find something useful which they did not know they owned. Those who never have to change house become indiscriminate collectors of what can only be described as clutter. They leave unwanted objects in drawers, cupboards and attics for years in the belief that they may one day need them. Old people also accumulate belongings for two other reasons, lack of physical and mental energy, and sentiment. Things owned for a long time are full of associations with the past, perhaps with the relatives who are dead, and so they gradually acquire a sentimental value.

Some things are collected deliberately in an attempt to avoid wastage. Among these are string and brown paper, kept by thrifty people when a parcel has been opened. collecting small items can be a mania. A lady cuts out from newspapers sketches of model clothes that she would like to buy if she had money. As she is not rich, the chances are that she will never be able to afford such purchases. It is a harmless habit, but it litters up her desk.

Collecting as a serious hobby is quite different and has many advantages. It provides relaxation for leisure hours, as just looking at one’s treasure is always a joy. One doesn’t have to go out for amusement as the collection is housed at home. Whatever it consists of - stamps, records, first editions of books, china- there is always something to do in connection with it, from finding the right place for the latest addition to verifying facts in reference books. This hobby educates one not only in the chosen subject, but also in general matters which have some bearing on it.

There are other benefits also. One gets to meet like-minded collectors to get advice, compare notes, exchange articles, to show off one’s latest find etc. So one’s circle of friends grows. Soon the hobby leads to travelling, perhaps a meeting in another town, possibly a trip abroad in search of a rare specimen, for collectors are not confined to one country. Over the years one may well become an authority on one’s hobby and will probably be asked to give informal talks to little gatherings and then, if successful, to larger audiences.

(a) On the basis of your understanding of the above passage make notes on it, using headings and subheadings. Use recognisable abbreviations (wherever necessary - minimum four) and a format you consider suitable. Also supply an appropriate title to it.

(b) Write a summary of the passage in about 80 words.

Describe the different arguments made in favour of protection of depressed classes in the Constituent Assembly.

The scalar product of the vector

a unit vector along the sum of vectors

is equal to one. Find the value of λ.

Find points on the curve

at which the tangents are

Two balls are drawn at random with replacement from a box containing 10 black and 8 red balls. Find the probability that

(ii) first ball is black and second is red.

(iii) one of them is black and other is red.

The probability of obtaining an even prime number on each die, when a pair of dice is rolled is