Where q = charge of the particle ,


v = velocity of particle and B is the magnetic field in that region.

Thus the described path will be helical as shown in the figure and the velocity's parallel component will make the particle move along the direction of the field. 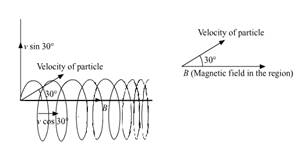 A deuteron and an

An electron and a

Show that a force