A block of mass m 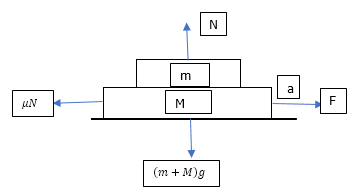 Given that acceleration a =

Now by equating the forces along the surface we have the

(b) Let f be the frictional force acting on the smaller block, along the movement only this force is on the block whose acceleration is a =

Hence this force should be equal to mass× acceleration =

(c) Now during the displacement d, velocity of the block can be evaluated by using uniform motion equation

Now substituting for the values, we get v=

Therefore, the change in K.E is =

So, work done by the frictional force on the smaller block by the larger block = change in kinetic energy ( from work energy theorem) =

A block of mass 1

The bob of a pend