A block of mass 15 kg is placed on a long trolley. The coefficient of static friction between the block and the trolley is 0.18. The trolley accelerates from rest with 0.5 m s-2 for 20 s and then moves with uniform velocity. Discuss the motion of the block as viewed by (a) a stationary observer on the ground, (b) an observer moving with the trolley.

Time for which the trolley accelerates, t = 20 s

To check whether the block will slide or not, let us compare the force due to trolley and

Force, F on the block due to accelerating trolley is given by,

The force of friction between the block and the trolley is greater than the applied force by trolley. Hence for an observer on ground the block will seem to be moving at the same velocity as that of trolley.

b) For an observer moving with the trolley, the trolley and the box will seem to be at rest.

How useful is this solution?We strive to provide quality solutions. Please rate us to serve you better.
PREVIOUSTwo bodies A and B of masses 5 kg and 10 kg in contact with each other rest on a table against a rigid wall (Fig. 5.21). The coefficient of friction between the bodies and the table is 0.15. A force of 200 N is applied horizontally to A. What are (a) the reaction of the partition (b) the action reaction forces between A and B? What happens when the wall is removed? Does the answer to (b) change, when the bodies are in motion? Ignore the difference between μs and μk.NEXTThe rear side of a truck is open and a box of 40 kg mass is placed 5 m away from the open end as shown in Fig. 5.22. The coefficient of friction between the box and the surface below it is 0.15. On a straight road, the truck starts from rest and accelerates with 2 m s-2. At what distance from the starting point does the box fall off the truck? (Ignore the size of the box).
Related Videos

Concept of Linear momentum and its conservation40 mins

A rectangular box lies on a rough inclined surface. The co-efficient of friction between the surface and the box is μ. Let the mass of the box be m.

(a) At what angle of inclination θ of the plane to the horizontal will the box just start to slide down the plane?

(b) What is the force acting on the box down the plane, if the angle of inclination of the plane is increased to α θ >?

(c) What is the force needed to be applied upwards along the plane to make the box either remain stationary or just move up with uniform speed? 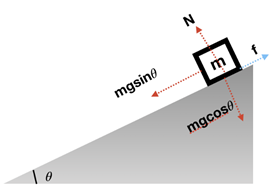 (a) force on the floor of the helicopter by the crew and passengers.

(b) action of the rotor of the helicopter on the surrounding air.

(c) force on the helicopter due to the surrounding air.

There are four forces acting at a point P produced by strings as shown in Fig. 5.11, which is at rest. Find the forces F1 and F2 . 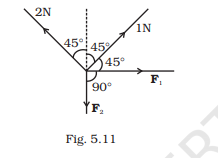 When a body slides down from rest along a smooth inclined plane making an angle of 45° with the horizontal, it takes time T. When the same body slides down from rest along a rough inclined plane making the same angle and through the same distance, it is seen to take time pT, where p is some number greater than 1. Calculate the co-efficient of friction between the body and the rough plane. 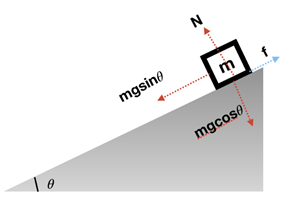 Block A of weight 100 N rests on a frictionless inclined plane of slope angle 30° (Fig. 5.7). A flexible cord attached to A passes over a frictionless pulley and is connected to block B of weight W. Find the weight W for which the system is in equilibrium. 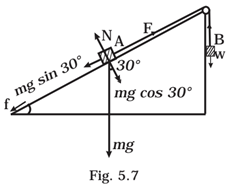 A block of mass M is held against a rough vertical wall by pressing it with a finger. If the coefficient of friction between the block and the wall is μ and the acceleration due to gravity is g, calculate the minimum force required to be applied by the finger to hold the block against the wall? 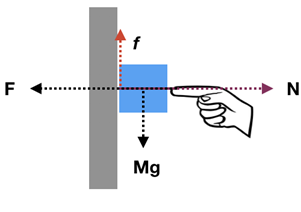 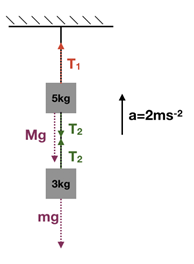