3. Motion In a Straight Line

B. speed of ball changes every 10 seconds.

C. average speed of ball over any 20 second interval is fixed.

D. the acceleration of ball is the same as from the train.

How useful is this solution?We strive to provide quality solutions. Please rate us to serve you better.
PREVIOUSA spring with one end attached to a mass and the other to a rigid support is stretched and released.NEXTRefer to the graphs in Fig 3.1. Match the following.Graph Characteristic(a) (i) has v > 0 and a < 0 throughout.(b) (ii) has x > 0 throughout and has a point with v = 0 and a point with a = 0.(c) (iii) has a point with zero displacement for t > 0. (d) (iv) has v < 0 and a > 0.
Related Videos

Understand The Interesting Concept Of Relative velocity in 1- Dimension44 mins

A ball falls on the ground from a height of 2.0 m and rebounds up to a height of 1.5 m. Find the coefficient of restitution.

Two stones are thrown up simultaneously from the edge of a cliff 200 m high with initial speeds of 15 m/s and 30 m/s. Verify that the graph shown in Fig. 3.27 correctly represents the time variation of the relative position of the second stone with respect to the first. Neglect air resistance and assume that the stones do not rebound after hitting the ground. Take g = 10 m/s2. Give the equations for the linear and curved parts of the plot. 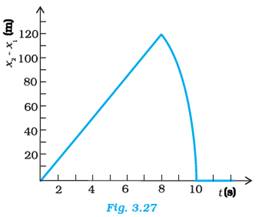 A uniformly moving cricket ball is turned back by hitting it with a bat for a very short time interval. Show the variation of its acceleration with time. (Take acceleration in the backward direction as positive).

The velocity-displacement graph of a particle is shown in Fig. 3.5.

(a) Write the relation between v and x.

(b) Obtain the relation between acceleration and displacement and plot it. 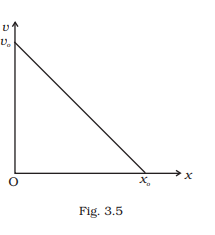 A ball is dropped from a building of height 45 m. Simultaneously another ball is thrown up with a speed 40 m/s. Calculate the relative speed of the balls as a function of time.

A ball is bouncing elastically with a speed 1 m/s between walls of a railway compartment of size 10 m in a direction perpendicular to walls. The train is moving at a constant velocity of 10 m/s parallel to the direction of motion of the ball. As seen from the ground,