The order would be -0.53, -0.80, -0.87 and -3.1. The minus sign would not be considered as it represents only the inverse relationship between the price and quantity demanded. It does not represent the inherent value of elasticity.

The price elasticity of demand for the commodity is 5.6. The demand is elastic in nature. When the change in price results in a more than proportionate change in the quantity demanded, the demand is considered as elastic. The elasticity coefficient of elastic demand will be greater than 1 (Ed>1). The demand curve would be a flat downward sloping curve. 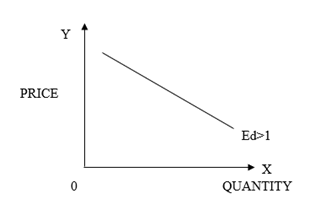