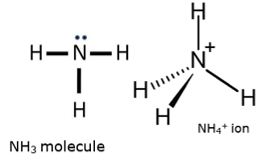 In H2O molecule, H is attached to a highly electronegative atom. So there is Hydrogen bond formed between H of one molecule and O of another molecule. Through this bonding water exist as a network of molecules. These bonds are strong enough and hence H2O has a higher boiling point. While in H2S molecule there is no such possibility of H-bonding since it is a less electronegative element. Therefore it has a low boiling point when compared to H2O.

(i) when Iron is treated with HCl, the reaction releases H2 gas. Therefore ferrous chloride (FeCl2) is formed instead of ferric chloride (FeCl3).

In the above molecules, hydrogen bonded to oxygen is called the acidic proton. Acidity of a compound is defined as the ease with which it release proton. For the proton to be released easily the O-H bond must be weaken. On increasing the oxidation Number of the central atom to which O-H bond is connected acidity is increased. Since in HClO4, Cl atom is connected to 3 more O atoms bond strength weakens and acidity increases. Whereas in HClO, oxidation number of Cl atom remains the same so its proton is less acidic.

(iii) On moving down the 15th group, bond dissociation enthalpy decreases which means that these bonds are quite easy to break. Consequently, reducing character also decreases. Hence, Bi being the last element shows strong reducing property.