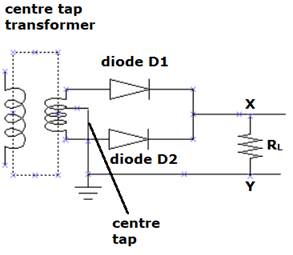 The working of this circuit is as follows:

i) During one half cycle (of the input ac) diode D1 alone gets forward biased and conducts. During the other half cycle, it is diode D2 (alone) that conducts.

ii) Because of the use of the centre tapped transformer the current though the load flows in the same direction in both the half cycles.

Hence we get a unidirectional/ direct current through the load, when the input is alternating current.

b) The circuit symbol and truth table for NAND gate is given below:

What had been put