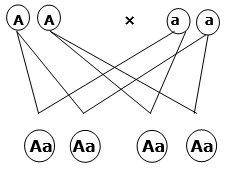 All progeny (100%) are Axial flowers if the plant characteristic trait is homozygous dominant. 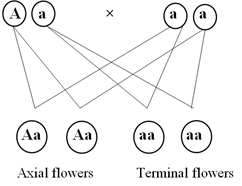 b. Mendel’s law of inheritance:

• Law of Segregation: In a cross involving single character, the factors responsible for the two traits are brought together in the F1 generation but are later segregated during the formation of gametes.

• Law of Independent Assortment: the factors responsible for the two traits are brought together in the F1 generation, but get independently assorted during gamete formation thereby upholding the purity of gametes.

Law of segregation is the law that is universally accepted.

1. An operon is the linear arrangement of genes controlled by a single promoter.

It is divided into two regions, namely:

b. Regulatory region: the region that regulates the functioning of the structural region.

(sequence where repressor protein binds; if bound the operon is inactive)

Here, the inducer is “Lactose”; presence of lactose makes the lac operon functional.

In absence of inducer, the repressor protein is produced which binds to the operator and does not allow RNA polymerase to transcribe structural region.

• Lactose acts as inducer thus absence of lactose switches off the operon.

• Repressor protein produced by regulatory gene (i-gene) is free (in the absence of inducer.)

• Preventing RNA polymerase to transcribe the structural gene and operon is switched off.

Regulation of gene expression in eukaryotes occurs at various levels:

• Transport of mRNA from nucleus to cytoplasm

• In prokaryotes m-RNA is rarely processed but it is the regular feature in eukaryotes.

• The processing occurs simultaneously with the transcription that is it is an exclusive nuclear event.

• The unprocessed m-RNA usually would not be exported from the nucleus, so RNA molecule can be regulated here also.

• A primary transcript is the single-stranded ribonucleic acid (RNA) product which is synthesized by DNA transcription and processed to yield various mature RNA products: mRNAs, tRNAs, and rRNAs.