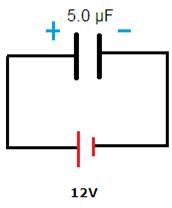 Initially 5.0 μF capacitor is charged to 12V as shown in fig. 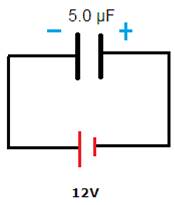 Next, the positive plate of this capacitor is now connected to the negative terminal of a 12V battery as shown in fig.

When the capacitor is connected to the battery of 12V with first plate to positive and second plate to negative, a positive charge Q = CV appears on one plate where, C is the capacitance and v is the voltage applied, and –Q charge appears on the other.

When the polarity is reversed, a charge –Q appears on the first plate and +Q on the second plate.

A total charge of 2Q accumulates on the negative plate.

Therefore, 2Q charge passes through the battery from the negative to the positive terminal.

The battery does a work-

Since, a total charge of 2Q accumulates on the negative plate

and the work done by battery dissipates as heat in the connecting wires.

Hence, the heat produced is -